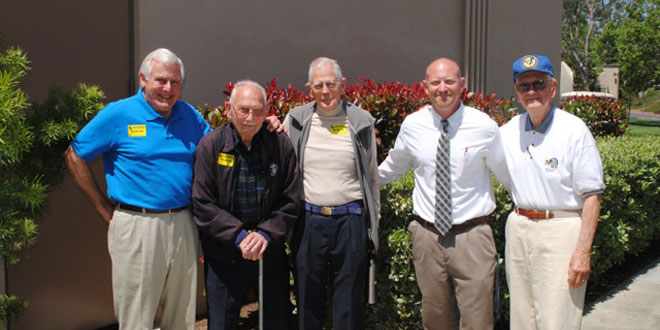 RANCHO SANTA MARGARITA, CA. – For the 5th consecutive year, History teacher Scott McIntosh provided his World War II classes the opportunity to hear first-hand experiences from three war veterans, from different military branches. Larry McCook, a retired member of the Marine Corps, has worked with McIntosh to bring veterans to SMCHS for the past 5 years as a chance to provide high school aged kids the opportunity to speak and listen to military personnel that lived and served during WWII, the very subject they are studying.

McIntosh sees this this opportunity for his students as invaluable and something they will take with them forever.

“Bringing the veterans in to class gives the students a first person account of what is was like for those who were there. The textbook and my lectures can’t provide them with that learning experience. Ultimately, this is the day that the students will remember for the rest of their lives long after they have forgotten all about my lectures and the assignments from the book.”

This year, students listened to Captain Wes Wilson of the USMC, Seaman 1st Class Ernesto Schimmer of the US Navy, and Lieutenant Joe Onesty of the US Army Air Corp , which was the precursor to the Air Force.

These veterans told tales of being engaged in aerial combat, meeting their wife while in boot camp, and seeing the world at the ripe age of 17.

Lieutenant Onesty remembered taking his entrance test into the US Army Air Corp before turning age 18; Seaman 1st Class recanted being a surfer from Santa Monica before deciding to join the US Navy, and Captain Wilson spoke about the different ranks he obtained during his 20+ years of service to our Country.

All three men conveyed the same message during their time with the class which was to make sure the students remained healthy, take care of themselves, and to take the path that in the years to come will make them happy.