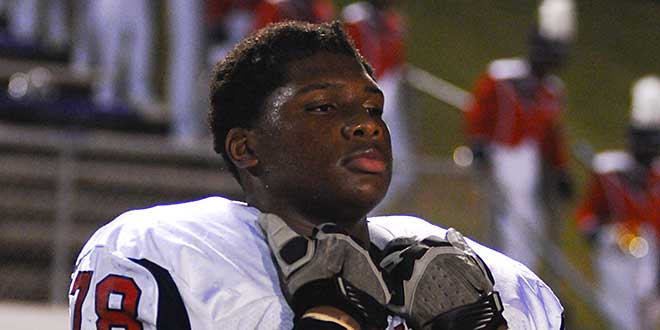 Students trek through high school looking forward to their senior year as a capstone and celebratory year of school achievement…but the truth is…senior year is tough. It’s filled with tough decisions. It’s the year where young people ponder for countless hours just what it is they want to do with the rest of their lives. During the year, millions of high school seniors make that final decision to attend college, and which college to attend. The college selection process involves multiple factors, resulting in an incredible amount of stress and pressure on 17 and 18 year old teenagers, and this is especially true when that 17-year-old student is the number one rated high school football player in the nation; Trenton Thompson from Westover High School in Albany, Georgia.

Standing at 6’4″ and an impressive 300 pounds, Thompson is the most highly recruited football player in the nation. “Big Trent,” as his teammates call him, plays defensive tackle for Westover High. Mike Farrell, a national recruiting analyst for Rivals.com notes, “Defensive tackle is one of the most important positions in football, so a marquee guy who is athletic and can not only penetrate and get push but also run plays down to the outside is rare.” Trenton made an impressive 83 tackles and 12 sacks as a junior.

Thompson’s on field skills are not limited to defensive tackle. “I’ll play anywhere on the defensive line,” Thompson clarified. “I’ve played both nose guard and defensive end before. Actually, I also used to play a little running back, back in the day,” he laughed.

Thompson started playing football in middle school where he also played basketball. As Thompson got older he decided to drop basketball to focus more on football. “I first met Trenton when he was in 8th grade. I’ve been coaching him for three and a half years now. He works hard, every day. His work ethic is a tremendous asset,” commented Westover head football coach Octavia Jones.

To read the rest of this article, check out the latest issue of High School Illustrated – USA National Edition for iPad and iPhone, completely free on the App Store.