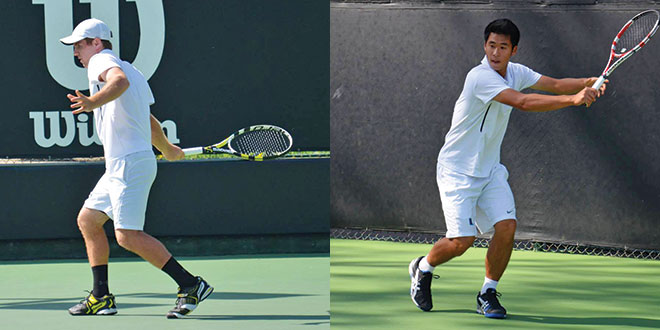 All great athletic programs have length in the form of a strong history; and depth with great talent. The University High School tennis team fills out both dimensions as it earned a legacy as one of the best tennis programs in Southern California. The numbers indicate the length of the program’s success: 193 wins and only six losses within the last nine years, fourteen former players currently playing college college tennis.

A big part of the driving for the team’s current success are two exceptional co-captains: Eric Tseng and Drew Dawson.

Both seniors, Eric and Drew, have played on the team throughout their high school careers, and both will play tennis in college. Eric Tseng will add to a powerful UCSD tennis program and Drew Dawson is headed with high shops to play for the Fighting Irish at Notre Dame.

Both players recounted the lessons they learn with four years of varsity tennis. Tseng summarized the mental shift from an individual sport to the notion of tennis as a team endeavor. “Tennis, until high school, was absolutely only an individual sport. When I won, I took all the glory, and when I lost, I bore all the fault. As an incoming freshman to not only another high school tennis team, but one that was hailed and had a reputation of class, I could not wait for my turn to partake in it. Hearing how great Coach Kessler was, on and off the court, excited me just as much as being a part of an elite squad of high school tennis players.”

Tseng, in addition to being co captain, is a highly ranked Socal player, has been named All-Orange County for three years in a row and is defending CIF double’s champion.
Dawson has been a highly ranked national player since he was fourteen, and among other accomplishments has won the Ojai doubles title two years in a row, going for three this year.

“I joined the tennis team because I wanted to experience a side of tennis that as juniors we rarely get to. The team aspect of high school tennis was very appealing to me and my older sister enjoyed her years on the girls team. I wanted to make my mark at Uni and figured tennis was the best way to do that,” said Dawson.

The two boys are certainly not the first co-captains the team has had, but they have made great headway in turning a team into a family.

“I am very proud of these boys. First and foremost they are student/athletes. The trend among many top junior players is not to play high school tennis or to even skip high school completely. These boys work hard in the classroom and hard on the tennis court. I admire their ability to play under the pressure that is put upon them by the press, the coaching staff and the inherent pressure of continuing a tradition of winning and excellence,” said coach John Kessler.