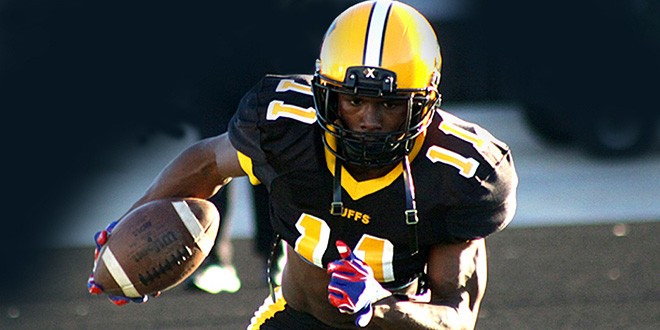 Close your eyes for a minute and prepare to imagine. Imagine being a 17-year-old high school athlete, winning a state title in track. How great of a feeling would that be? Now imagine being the eighth-ranked football player in America with every college football program wanting you to play for their alma mater. You have your pick of where you wanted to play ball! Now imagine being the Gatorade Athlete of the Year.

Well, this isn’t a dream for Kendall Sheffield. For Kendall, this is reality. Kendall is a 6 foot 180 pound senior cornerback from Thurgood Marshall High School in Missouri City, Texas. Kendall is getting the attention of every college coach because of the way he plays, how well he runs on the track, and how he performs on the football field.

And, Kendall is impressive off the track and field as well. I had the pleasure of interviewing Kendall and I came to learn that he’s just as extraordinary in real life as he is on the field.

“Family is first,” Kendall told me in our interview when I asked him what is most important to him. He knows that he wouldn’t be in the position he is in today if not for his family. Kendall thanks his father for inspiring him to play football at such a young age. He was only seven years old when he first started playing football, a sport his father inspired him to master young. Kendall still to this day has vivid memories of scoring touchdowns for his Southwest Deers youth football team.

@hsillustrated
Previous Organic and Other Environmentally Friendly Foods
Next DIG IT! Kathryn Plummer — Confident, Competitive and a Flair for Fun