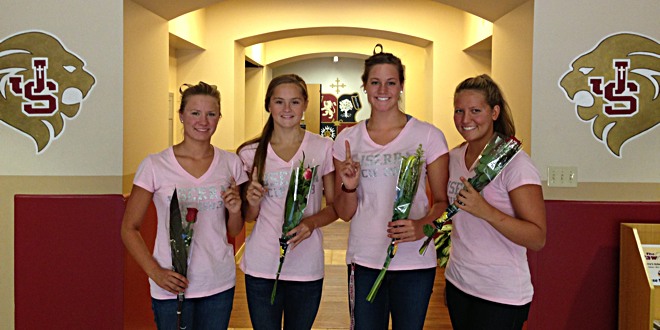 The CIF Championships held at the Riverside City College Aquatics Center played host to over 70 teams in the southern section.

“We were saying we’d be fine with either one,” said JSerra sophomore and US National swimmer Katie McLaughlin. “We did not expect both, it’s a little shocking.”

The JSerra scholar-athlete dream team made up of senior Rebecca Millard, sophomores; Karli Thuen, Katie McLaughlin, Brittany Kahn, and Kaitlyn Albertoli are a young force to be reckoned with. The same team of girls won the school’s first swim CIF Championship in 2012 as a team made up of mostly freshman.

Finishing the 400 freestyle relay in a national record of 3 minutes, 21.20 seconds, taking the title from Germantown Academy, Pa.

“I was worried that I would end my senior year on a disappointingly low note,” said JSerra senior Rebecca Milard. “I am so happy to have ended my time at JSerra winning our second CIF Championship and breaking a national record.”

Also setting county records were McLaughlin in the 100 butterfly in 52.93, the fastest time in Southern California and is now the third fastest time in the nation. McLaughlin also broke Olympian Sippy Woodhead’s 1982 record in the 200- freestyle.

“I am so proud of the entire team, they worked hard at the reaching the goals they set, and wouldn’t let anything stop them,” said Head Coach Mary McLaughlin.