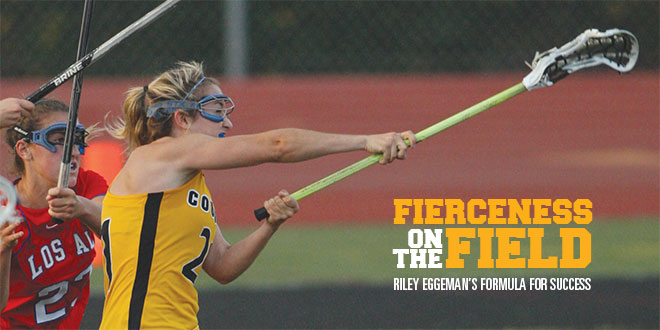 Fierceness on the Field: Riley Eggeman’s Formula for Success

She cradles, she passes, and she catches; the mesh of Riley Eggeman’s lacrosse stick is always hugging the surface of a ball, ready to rocket it across the line of the opponent’s goal. Riley was recently named the Orange County Register’s Player of the Year for lacrosse; distinction which goes along with many other accolades and accomplishments over the years.

Riley currently attends Capistrano Valley High School and plans to attend the University of Denver in the Fall with a Lacrosse and Academic scholarship. Riley selected Denver from several other offers as she experienced the recruitment process.

Riley has exceeded the national average play for her mid/center position with with 238 goals. She holds a national rank of 25 and a California statewide rank of 5 for girl’s lacrosse.

But, Riley recognizes that the awards and recognition do not come without works, lots of it. “My junior year was the year that I worked the hardest having multiple trainings outside of practices and it paid of. I was awarded with the orange county player of the year along with being first team all county and sea view league MVP. I was very surprised and so honored to be chosen for these along with being so happy my hard work paid off for me,” commented Riley about the formula for her success.

Every student athlete has some favorite and most memorable moments, including Riley.

“I still consider one of my greatest athletic achieves to be when I made varsity as a freshman for both soccer and lacrosse. For soccer, one other girl and I were the only four year players to make the team freshman year and to play on varsity through senior year. Each year in both my sports I trained extra and worked harder to be the best I could be. I was very humbled sophomore year when I made the 1st team all county lacrosse team. That was the first big achievement I made in lacrosse,” exuded Riley during our High School Illustrated interview.

Versatility has also been part of Riley’s formula. In addition to lacrosse, she participated in soccer for her entire high school career. Soccer seemed to be the perfect transition sport into lacrosse. While Riley didn’t have her stick skills perfected when she started lacrosse, she could run continuously and effectively. “Soccer taught me to see the field even in places where the ball is not and it got me very fit. I did not need hand eye coordination in soccer but I did learn how to dodge and use quick feet from soccer.”

When she was younger, she tried out swimming, dance, gymnastics and soccer before discovering lacrosse. She realized that lacrosse was the sport she wanted to pursue when she joined club XTEAM. This team provided a taste of what it may be like to play college lacrosse. Riley noted “[Lacrosse] taught me so much as a player and a person. Playing on that team made me love lacrosse so much.”

@hsillustrated
Previous Got a Job? Finding a Summer Job or Internship
Next Fitness: Creating Rotational Power for Sports