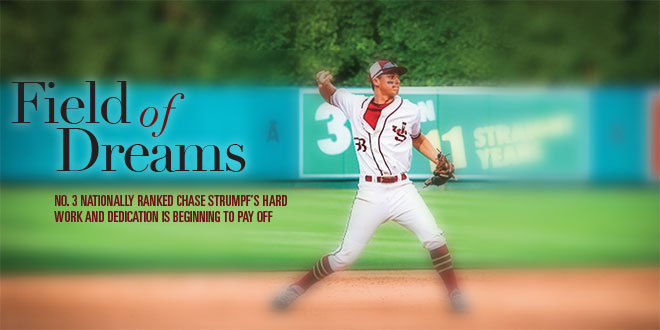 Field of Dreams: No. 3 Nationally Ranked Chase Strumpf Hard Work and Dedication is Beginning to Pay Off

Watching Chase Strumpf send balls sailing over the heads of his opponents, it’s hard to believe that this kind of power and ease is coming from a high school sophomore. But continuously raising expectations is nothing new to Chase. He ranked no. 3 in his age group by Baseball America, proved he’s someone to watch even before he debuted on JSerra Catholic High School’s Varsity team.

Although he played soccer and basketball as a child, baseball was always Chase’s true passion. “I tried everything, but in the end it was always baseball,” he said. His baseball career began when he was seven years old, on travel teams. He caught the attention of his current coach, Brett Kay, when he was twelve. Strumpf had enrolled in Kay’s youth baseball camp at JSerra, and it didn’t take long for his coach to spot his potential.

Upon entering high school, Strumpf became a starting shortstop for the JSerra Lions; Kay is the first to commend Strumpf on the maturity of his game. Kay has commented that Strumpf does not act like a freshman and his maturity level is more like a junior or senior.

The current high school sophomore committed to playing at UCLA when he attends college in the fall of 2016, which decision he made before he’d even played his first varsity game. “I’d gone to UCLA twice over summers to play baseball. I just really wanted to show them what I could do, and hope for the best after that. I guess you could say they were the first to ask, but I never really thought about going for another school. I’d always focused all my energy on UCLA, so when they offered, I instantly said yes.”

Having the pressure of the college application process off the table is definitely a relief for Chase, but don’t expect him to slow down because of it. “It’s awesome. I really can’t express how thankful I am that I don’t have to worry about the application process. I can just focus on my schoolwork, focus on my game- I would say I can just kick back, but I want to finish strong. Obviously my dream is to play in the major leagues, but a degree is really valuable. College is important. My parents taught me that from a young age, but I honestly believe it.”

@hsillustrated
Previous 5 Healthy Fruit Smoothies For An Easy Breakfast
Next Got a Job? Finding a Summer Job or Internship