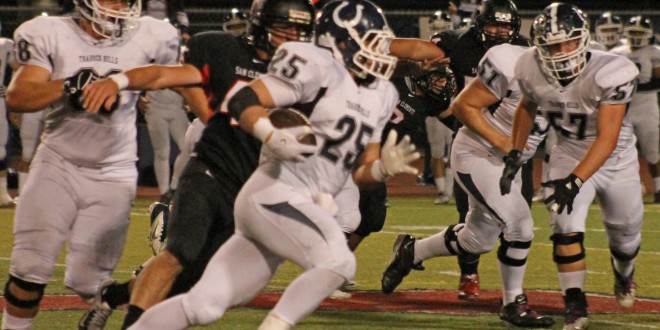 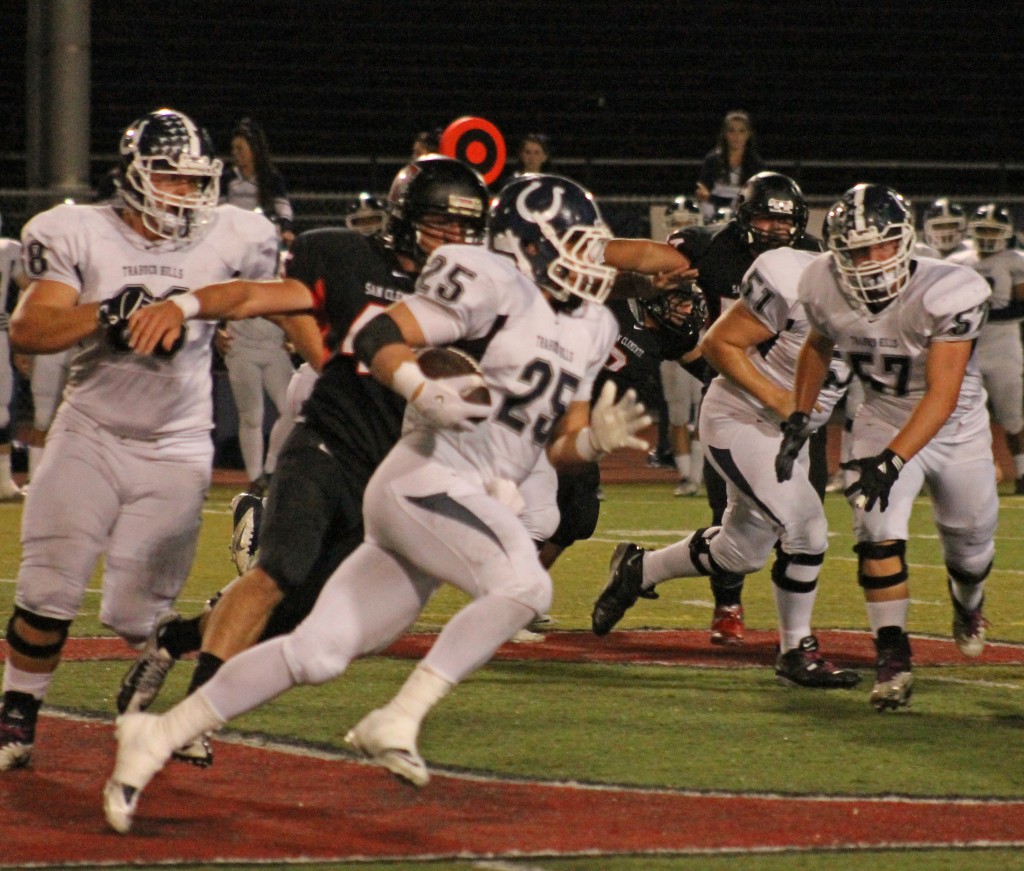 Mission Viejo (10-0) The undefeated Mission Viejo team, ranked No. 1 in the county, is looking to win its first Pac-5 Division Championship. During the Nov. 2 game against El Toro, the Mission Viejo Diablos exerted their dominance with a 49-7 win. The Diablos next take the field against Westlake, the No. 4 team from the Marmonte League.

Mater Dei (8-2) Proving the strength of the division, with just two losses, the Mater Dei Monarchs are seeded No. 4. Both losses came in close, hard-fought games with St. John Bosco and Narbonne. Mater Dei’s first opponent of Division play is Lakewood, which averages 30 points a game and is fully rested from a bye week.

El Toro (9-1) The Chargers just have one loss on the season, but it was a very decisive 7-47 game against Mission Viejo. The most talked about player on the El Toro squad is Conner Manning, last year’s Orange County offensive player of the year. Until the game against the Diablos, Manning had only thrown three interceptions during the season — but he seemed to fall apart with six interceptions thrown against the Diablos. Look for Manning and the whole team to bounce back against Santa Margarita.

Santa Margarita (8-2) After winning the CIF Championship last year, the Eagles have been on a wild ride this season. They lost a few valuable players to transfers this year, but the hardest hit came when senior quarterback Johnny Stanton suffered a season-ending ACL injury. Still, the Eagles have a great record. The Eagles take on El Toro during a first-round away game.

Tesoro (7-3) Fresh off of firing head coach Brian Barnes, the Tesoro team won big against Chula Vista on Nov. 2. With the luck of a flipped coin, Tesoro managed a wild-card slot in Division play. They will play the Trinity League champion St. John Bosco in the first round.

Beckman (3-7) With just three victories, it hasn’t been a particularly successful year for the Beckman Patriots. However, they scored an at-large slot to plan in the Southern Division.

Corona del Mar (8-2) After winning the Southern Division last year, Corona del Mar is back with another No. 1 seed. The team is led by quarterback Cayman Carter, who has passed for 14 touchdowns and run for 10 touchdowns this season.

Laguna Beach (9-0-1) Despite having a slightly better record than Corona del Mar, the Breakers are seeded No. 2 in the division. The Breakers are bolstered by running back Drake Martinez, who leads the county with 29 touchdowns this season.

Northwood (4-6)  After missing the playoff last year, the Timberwolves rallied for a division spot this year. The team finished second in the Pacific Coast League after a regular-season finale win against University.

Woodbridge (5-5) The Warriors finished third in the Pacific Coast League. The team reached the quarterfinals for the past two seasons, so look for some more good competition from Woodbridge this year.

Foothill (8-2) This was the best regular season the Foothill Knights have had in years. The team finished second in the Century League with very decisive wins against six teams. Foothill begins division play against Laguna Hills.

Laguna Hills (6-3) Defense is Laguna Hills strong suit — they’ve only allowed more than 14 points in one game this season. They start division play with an away game at Foothill.

Newport Harbor (6-4) When the Sailors started the season with two losses, things aren’t looking great. However, the team got its act together later in the season to win against teams such as Fountain Valley, Huntington Beach and Los Alamitos. Newport Harbor will host Troy in the first round and will seek its first division win since 2007.

Capistrano Valley (8-2) With the luck of a coin flip, the Capistrano Valley Cougars are seeded No. 1 in the Sea View League. This was a big improvement over recent years, considering the program hadn’t made the playoffs since 2005 and hadn’t won more than four games since 2007. The Cougars will host Huntington Beach in the first round.

Tustin (10-0) Even with a perfect record, the Tustin Tills are seeded No. 2. Although the record says a lot about the strength of the team, the deeper statistics say even more: The Tillers won nine of their 10 games by a margin greater than 27 points. Now they look to defend last year’s division championship. The first test for the Tillers will be against El Dorado.

Emily is the publishing coordinator for High School Illustrated — and she loves receiving new content! She is a recent journalism graduate from the University of Kansas. Her favorite sport to participate in is track and field. Her favorite sport to watch is basketball. Rock chalk, Jayhawk!
Previous How to Deal With Insecurities as a Teenager
Next #HSIOC Roundup: November 12