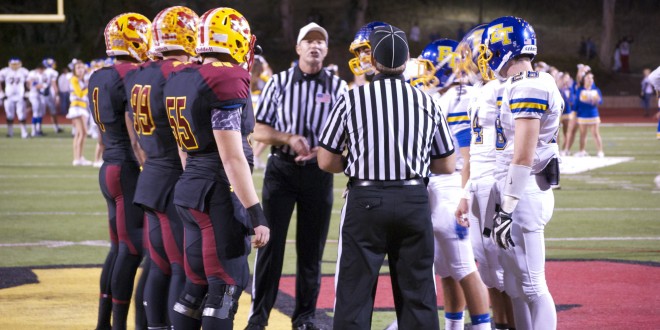 History does repeat itself.

It was a contest only in the first quarter. With six interceptions of Connor Manning passes, the Chargers never really got into their customary game.

This game reflected the entire Diablo season as they scored their year long average of 49.5 points. They also did it with poise and consistent four-quarter effort.

The two unbeaten teams (both 9-0) went into the game expecting a shootout till the final minutes of the final quarter. It could have been. At times, El Toro showed precise ball handling and crisp series, but they just never got in any groove.

Manning’s six interceptions alone doomed any effort to make this a sporting match. As the Diablos consistent offensive effort wore down the Chargers, the Mission Viejo defense controlled the line all night.

Manning, with 193 passing yards, performed well below his 390 yard average.

Despite the lopsided results, fans from both sides cheered the teams all night. HSI estimated more than 7,500 Diablo and Charger fans supported their teams at the Diablo field.

Next up for Mission Viejo is the Southern Section Pac-5 Playoff.

Wally Castle (wallyboy) grew up getting blue jeans and white football pants with red stripes all full of grass stains. Football moved to baseball and eventually tennis. Competition on the field of play taught me that it was not all about winning or loosing but that "The happiness of your life depends upon the quality of your thoughts.” Marcus Aurelius.
Previous San Juan Hills Football Overcame Challenges On and Off the Field
Next Trabuco Hills Defeats Tritons in End-of-Season Game