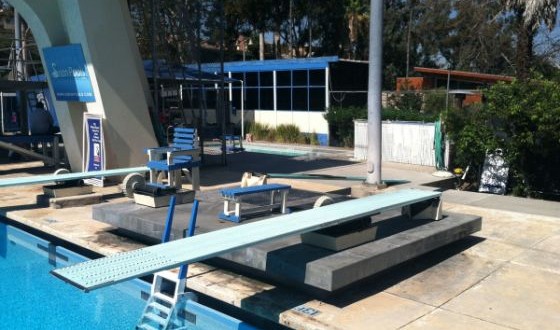 During the weekend of Sept. 29-30, the Mission Viejo Nadadores’ dive office was broken into and the complex was vandalized.  Practice at the world-famous club was canceled on Monday, Oct. 1, as police investigated the scene.

According to a statement from the club, vandals threw a large cement block through the glass door of the office and flipped a 1-meter springboard off its hinges. Vandals also stole a custom “Mission Viejo” sign and computer from the club’s office. In all, there were a few thousand dollars in damage.

Blood droplets near the pool were among other clues left behind.

Since the mid-1970s, the Mission Viejo Nadadores diving complex has been a well-known training center for Olympic hopefuls. The club boasts eight Olympians, six Olympic gold medals and 48 national championships.

Emily is the publishing coordinator for High School Illustrated — and she loves receiving new content! She is a recent journalism graduate from the University of Kansas. Her favorite sport to participate in is track and field. Her favorite sport to watch is basketball. Rock chalk, Jayhawk!
Previous Santa Margarita Boys Cross-Country: Jog-a-Thon For the Janics
Next Olympic Recap: How Did O.C. Stars Fare?

To most of us, the net on a tennis court divides the physical space between …