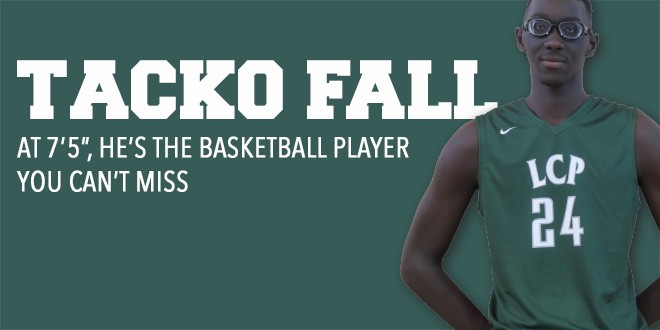 Tacko Fall, a 7-foot-5 high school senior from Senegal, thrives on and off the court

TAVARES, Florida__As young players across the country gear-up for the upcoming basketball season, Tacko Fall stands above them all.

The 7’5″ high school senior currently holds the spot as the tallest player in the country, standing two inches over even the NBA’s tallest player, Hasheem Thabeet, who measures 7’3″.

Towering above other players his age, Tacko owns his height and uses his advantage to excel.

“It gives me that much more confidence,” said Fall.

“I think that it can go either way,” said Atkins when discussing how such height shapes a high school player. “Some kids don’t feel like they fit in when they are so different and tend to be somewhat depressed or really keep to themselves. Tacko has overcome that stage and has blossomed into a person that is very confident.”

Growing up in Dakar, Senegal, basketball played a huge role in Fall moving to the United States in 2012. With his striking height and the new drive to play, Fall quickly became a highlight in the basketball scene, as a seven-foot-five high school player doesn’t exactly stay low-key.

It didn’t take long for people to notice Tacko Fall. The fan base grew, media talked and colleges wanted him.

Fall had his pick of major universities with prominent basketball programs,
all of which would have been an honor to play for.

“We narrowed it down to a couple schools and basically it was his decision,”
said Atkins. “I just told him, go where your heart is. Pray about it, and wherever your heart leads you, that’s where you need to go.”

With looks from Georgetown, Purdue, Wake Forest, Vanderbilt, Georgia Tech,
and more, Fall chose to play as a Knight at the University of Central Florida.

While many aspects played a role in choosing UCF, certain details sealed the deal for Fall.

“It was really about the coach,” said Fall. “I’ve got a pretty good relationship with Coach Jones.” Coach Donnie Jones is the head coach for the UCF men’s basketball team.

And that relationship is of strong importance to Fall, especially after the bond he has made with Coach Atkins. Much of his knowledge of the game has come from Atkins, as Fall has only been playing basketball for two years.

“The best thing about teaching Tacko was he didn’t really have any bad habits,” said Atkins. “That’s really key for a guy in his position. With him, it was really about just teaching the basics.”

For Fall, picking up on the level of intensity in the game was the most difficult aspect.