The HSI style guide will continually develop as questions arise.

abbreviations Write out long organization titles on first reference with the initials following. For example, “The Nebraska School Activities Association (NSAA) announced…” and then “The NSAA…”

alright This is an exception to the AP Stylebook.

book titles Put in quotation marks. Capitalize principle words. Capitalize “small words,” i.e. “the,” “a” or “an” if it is the first of last word in the title. Examples: “Gone With the Wind” and “Of Mice and Men.”

boy, girl Acceptable for all high school students even if 18 years or older.

centuries 20th century, 21st century, etc. This is the only time that “th,” “st,” etc. is acceptable. Do not capitalize “century,” unless it is a proper name, such as “21st Century Fox.”

college, university Capitalize as parts of a proper name, e.g. The University of Nebraska-Lincoln. Lowercase when standing alone, e.g. “She hopes to go to college.”

days of the week Do not abbreviate.

decades Use an apostrophe if just using the past two numbers, e.g. “the ‘90s.” Do not use an apostrophe to show plural, e.g. “She started tennis in the 1970s” is correct.

dollars Use figures and the $ sign, e.g. “The University of Nebraska offered a $10,000 scholarship.”

Fahrenheit Spell out the first time, e.g. “Even though it was 100 degrees Fahrenheit…” Do not use on second reference.

figures Spell out numbers zero through nine. Use figures for numbers 10 and higher.

Islam Followers of the Islam religion are Muslims. Adjective for Islam is Islamic.

magazine names Capitalize the first letters of the words, but do not place in quotation marks and do not italicize.

mascots On first reference, use the full title, e.g. “The Missouri Tigers.” On later references, the capitalized mascot name is acceptable. Official mascot names should be capitalized when used to describe a specific team, e.g. “The Tigers are off to a great start.” However, only use mascot names when referring to a team or competitive club. For example, “All of the Lions from Lincoln High School” is wrong.

midnight, noon Do not use 12 in front.

nicknames Use quotation marks when inserting a nickname into a person’s identification, e.g. Sen. Henry M. “Scoop” Jackson. Do not presume that a person wants his/her nickname used — ask to make sure!

numerals Spell out numerals at the beginning of a sentence, e.g. “Ten students showed up.” An exception: Don’t spell out years.

OK Not ok or okay.

percent One word spelled out, e.g. “She scored 98 percent on the test.”

Q&A For Q&A-style stories, format the question in bold and the answer in regular size.

quotation Do not alter quotations even to correct grammatical errors. Do not misrepresent the original context of the quotation.

race Avoid using references to race unless it is vital to a story.

regions Capitalize geographical regions of the country, e.g. “She grew up in the Midwest” or “He goes to summer camp on the East Coast.”

teams Use the singular verb and pronoun “it” when referring to the collective unit, e.g. “The team had its best season ever.” Use the plural verb with the team name, e.g. “The Kansas Jayhawks are among the best basketball teams in the country.”

time elements Be careful with “today,” “tonight,” “this morning,” etc. The day of the week is preferable.

versus Spell it out unless in a headline.

years Use figures without commas for standalone years. This is the lone exception to the rule that figures should not be used to start a sentence, i.e. “1990 was the last year…” is acceptable. Use figures with a comma for full dates, e.g. “On Dec. 7, 1941, the Japanese military attacked Pearl Harbor.”

Emily is the publishing coordinator for High School Illustrated — and she loves receiving new content! She is a recent journalism graduate from the University of Kansas. Her favorite sport to participate in is track and field. Her favorite sport to watch is basketball. Rock chalk, Jayhawk!
Previous Editing Basics
Next How to Avoid Dehydration 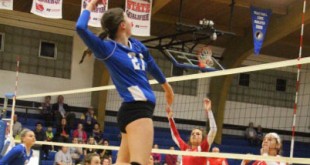