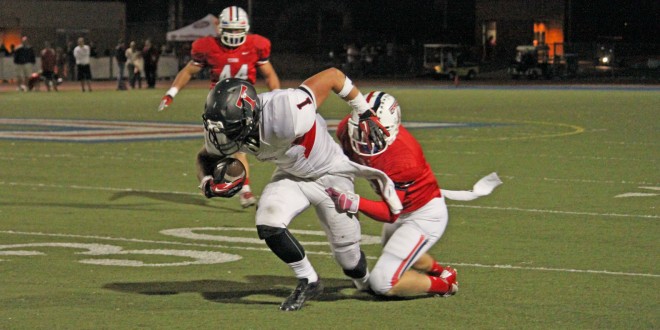 After losing four consecutive football games, the San Clemente Triton’s hopes of making it to the Pac-5 Division playoffs were in doubt before the Oct. 26 league game against the Tesoro Titans. Then, when Tesoro was ahead 21-7 with little more than three minutes left, San Clemente’s playoff dreams seemed even more distant.

But the Tritons rallied.

Aided by first-time starting quarterback Sam Darnold, a sophomore who replaced injured Sean Donnelly, the Tritons managed a 22-point run in the final minutes of the game to win 29-21.

The biggest play of the game came with just 14 seconds left. Darnold found Christian Bailey for a 34-yard touchdown run, which put the Triton’s within one point of Tesoro. The team successfully completed a two-point conversion and went ahead with seconds left in the game.

Running off of adrenaline, the Tritons were able to steal the ball back one more time for another touchdown with 4 seconds remaining.

Another highlight of the game came when San Clemente’s Bret Miller hit his 107 consecutive extra-point kick, which broke the CIF-SS record.

The Tesoro Titans next game is Friday, Nov. 2 at Chula Vista. The San Clemente Tritons also take the field on Nov. 2 for a league game against Trabuco Hills.

— All pictures courtesy of June Huston, a student at San Clemente High School. Learn more about how you can contribute photos on our share or submit page.

Emily is the publishing coordinator for High School Illustrated — and she loves receiving new content! She is a recent journalism graduate from the University of Kansas. Her favorite sport to participate in is track and field. Her favorite sport to watch is basketball. Rock chalk, Jayhawk!
Previous #HSIOC Roundup: School Spirit
Next Editorial: Used Correctly, Techology is a Valuable Learning Aid