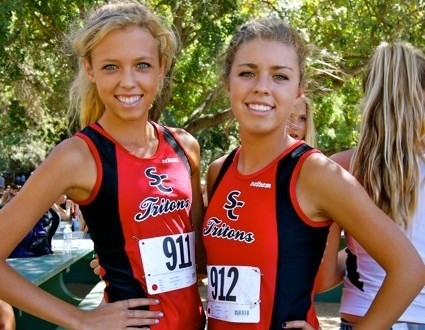 Running In Two: The Eisele Sisters From San Clemente

San Clemente cross-country star Melissa Eisele has many accomplishments under her belt. As a sophomore, she ran with her high school Division I team all the way to the CIF championship awards podium. Melissa has also been a part of the Orange County All-County Cross-Country Team and has been deemed the most valuable player for the girls’ Triton cross-country team since her freshmen year.

Melissa’s younger sister, Amber, is not too far behind. This fall, she joined the San Clemente cross-country team — and, despite Melissa’s extraordinary standings, Amber is driven to make a lasting impression of her own.

“In middle school, I went to nationals for cross-country in Alabama and my team got first place,” Amber said of her already impressive running resume.

As for participating with San Clemente, she says that the competitive aspect is usually just an afterthought.

“Being part of the team is so much fun because everyone gets along really well,” Amber said. “We love running with each other.”

Still, nothing compares to the bond between sisters.

“I love having Amber at high school with me,” Melissa said. “It’s cool having my sister be a part of not only my family life but my team and school life.”

The individual achievements of both girls stem in between family time and the track. Melissa is taking two AP classes and is involved with the Fellowship of Christian Athletes Club. Amber is in two honors classes and still devotes time to a group called the National Charity League. The girls also find time to spend with family and go the beach with friends.

The sisters try to spend as much time as possible together to improve their individual academic and athletic careers. Amber and Melissa both demonstrate the importance of a close-knit bond between siblings at school. They ultimately look out for one another.

In terms of competitiveness, the girls use the desire to win as motivators. Melissa broke a record already this year when she ran an impressive 17:22:00 for the 3-mile race at the Woodbridge Cross Country Classic in September. Amber is catching up with Melissa’s fast times — she already ran a 19:45:00 for the 3-mile at the Orange County Championships.

Having each other as teammates only strengthens their relationships and internal drive for the sport.

“My teammates and I are all very close,” Melissa said. “When we race, it’s not just for ourselves, but for everyone on the team.”

Keep an eye out for this dynamic duo. Don’t be surprised at the Sea View League Finals on Nov. 1 if both girls make record times.

Megan is a senior at Arnold O. Beckman High School. She also writes for her school newspaper. Her favorite activities are singing, playing the tuba, and being involved at church. Megan has a passion for meeting new people, especially within the Beckman campus. Go Patriots!
Previous Editorial: The Reason Fad Diets Fail
Next #HSIOC Roundup: School Spirit