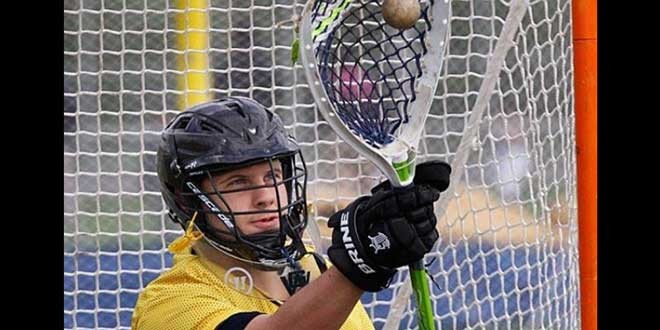 Paul Thiergartner – Deafness is No Barrier

The Silent Strength of Teamwork

The short jog from the locker room to the practice field at the beginning of a new high school lacrosse season is usually just an insignificant event. But it can be a gauntlet of anxiety and questioning if you are the only deaf player heading into your first practice with new, unfamiliar teammates. You know that your new teammates have played together from grade school to high school, have joked and jostled and with each other for years, and all live in a world with speech. How will you communicate? Will you be accepted and not bullied like you experienced in grade school? Why are you here? Why did you do this?

These are the doubts and questions that Paul Thiergartner asked himself as he took the field on the first day of practice as a sophomore player for the George Washington High School (Philadelphia) lacrosse team.

Team spirit, instead of bullying and odd glances, guided the first day, and goodwill won out over apprehension.What most team members and coaches take for granted–the ability to communicate by talking and listening–is a daily strategic challenge for Thiergartner. As a deaf student athlete, he must always consider how to speak and listen as a team member. He has accomplished this in a variety of ways. For example, this interview was conducted in a phone interview using the Video Relay Service, which allowed him to use American Sign Language (ASL) to communicate. And, Thiergartner’s communication with his new teammates was facilitated by another member for the team who knows ASL.

“The first day, my new friend Robert Franklin helped me to communicate with the coach, John Creighton, and the other team members. Robert can sign because his parents and sister are deaf, so he had the ability to help me talk, to have speech, and that changed everything,” explained Thiergartner about his first practice.

“All of my new team members were friendly and accepting. I even made another good friend that day, Christian Gonzalez. He pulled out his cell phone and suggested we could communicate with the letters on the keypad. That made me feel great, that someone was taking a step to communicate right away. That doesn’t always happen, and when it does, it’s awesome,” detailed Thiergartner.

@hsillustrated
Previous Michelle Mazza: When You Throw, Throw Hard
Next How Lexie Scott Made a Name for Herself in High School Football