Karl Towns, a senior from St. Joseph High School, has been named Gatorade’s Basketball Player of the Year for New Jersey.

Towns is a 7’1″ basketball phenom and is widely considered one of the top high school players in the country. Next year, Towns plans on playing basketball for the University of Kentucky, one of the nation’s most prestigious college basketball programs.

Towns is a two-time New Jersey Gatorade Player and was also named a McDonald’s All-American. 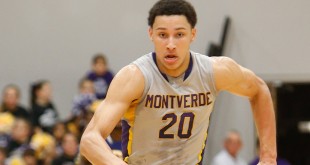 by Dominique Waldron What makes a great basketball player? His versatility across the entire court? …