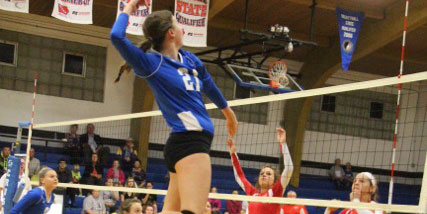 It must feel great to be a local celebrity in a small town where everyone knows your name. For this young athlete, she has this experience every day. She’s an 18-year old high school senior who stands 6’3″ tall and has already had much success in her athletic career. Mikaela talked about her own successes, but what’s more profound is the way others talked about it.

Winning a state championship, competing on a U.S. Olympic team and being chosen as the Gatorade National Volleyball Player of the Year are just a few of Mikaela’s many accomplishments as a young athlete.

Mikaela is from the small town of West Point, Iowa, with a population of 983 people. She’s a senior at Holy Trinity Catholic School in Fort Madison, Iowa, where she’s a member of what many consider one of the town’s big attractions…the volleyball team. Volleyball doesn’t seem to be a sport the locals of Fort Madison just do, but something they live. Whether young or old, many are just as passionate about the game of volleyball as Mikaela and her teammates are.

In a school with about 150 students, it may seem ironic that the team has such a standout volleyball player like Mikaela. 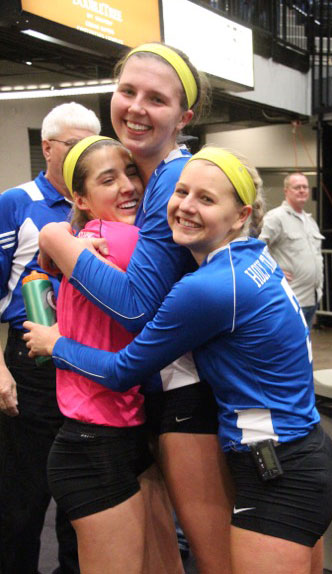 Mikaela’s love for the game began in preschool when she participated in volleyball programs and watched older girls play in state tournament games. “I just remember going to the state tournament and watching and being a part of the crowd…just thinking one day I really wanted to be down there on the floor playing for a state championship,” said Mikaela.

Little did she know she would soon accomplish that goal and so much more.

Melissa Freesmeier, Holy Trinity’s head volleyball coach, said they were blessed to have a player like Mikaela on the team all four years. “As a freshman we knew she was special. She was an impact from day one,” said Freesmeier.

She talked about how Mikaela grew over the years as a player and how she earned a varsity jersey from the beginning. Freesmeier said Mikaela didn’t play the full rotation on the court her first year. Mikaela worked on her back row defense and was eventually playing full rotation. “As each year grew, she would work on a different part of her game,” said Freesmeier.

Mikaela said her skills expanded from growing up and playing volleyball in lots of camps. She would learn from watching older girls play and how they’d critique her when she played. Today she looks up to Jordan Larson, a U.S. National Team member who was part of the 2012 Olympic team that won the silver medal. 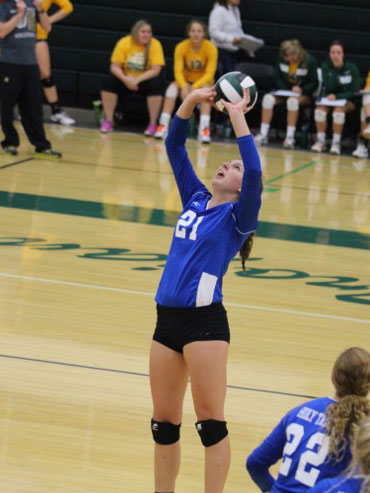 Mikaela helped lead her team to win the Class 1A state championship this past season. It was their first state championship title since the two schools, West Point Marquette and Fort Madison, merged 10 years ago into one school now called Holy Trinity Catholic.

The Lady Crusaders won the game in three straight matches against the Central Lions.

Tom Gendron, assistant coach, said winning this game allowed the school and the team to reach the pinnacle. “There’s this aura of confidence that we’ve never seen before just from the fact that we can now hang that state championship banner,” said Gendron.

Mikaela attributes winning this first title not only to what she and her teammates do on the court, but off the court as well. “This group of girls is something unique and special and throughout all the teams I’ve been on there’s really never been this sort of chemistry,” said Mikaela. 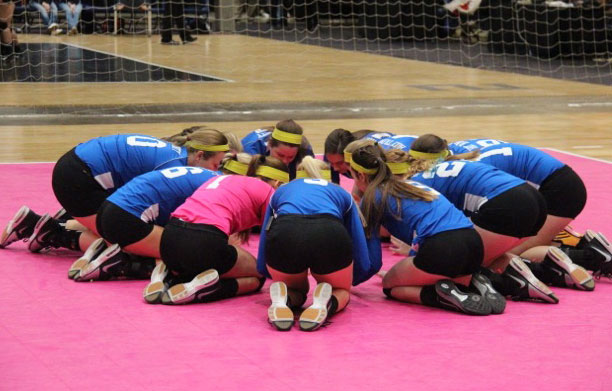 She said all 13 girls on her team were best friends and they never felt forced to hang out together, simply because they always wanted to, especially when it came to doing “mischievous” things to Coach Gendron like toilet papering his house or putting a carton of milk on his car windshield wiper.

Senior Lauren Pothitakis, a captain and libero (a player who specializes in defense) on the team, is one of Mikaela’s close friends. She said she couldn’t believe it when they won the championship after being the runner-up for three years in a row. “We were very blessed that we were able to experience this and especially for the seniors that we ended our last year on a really high note together,” said Pothitakis. 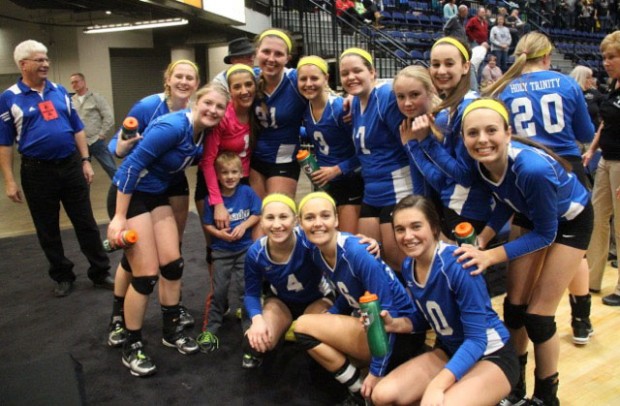 Lauren noted how Mikaela’s leadership and her skillset combined helped contribute to their team’s success. She said Mikaela was always able to step up and play wherever they needed her on the court and her teammates respected her for that.

Mikaela led the Crusaders to a 48-4 record and recorded 812 kills, 270 digs, 170 service aces and 95 blocks this past season. Although Mikaela said this championship is her proudest accomplishment, it’s definitely not her only one.

In 2013, Mikaela made the U.S. Girls’ Youth National Team that traveled to Thailand and competed in the Youth World Championships. Her team was the first USA women’s team to win a medal at any world championships, finishing second behind China. 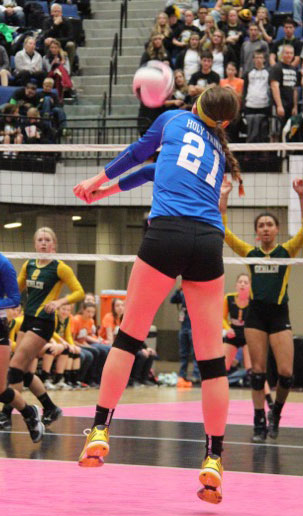 In 2014, Mikaela was a starter for the U.S. Women’s Junior National Team that won the gold medal at the U-2 Women’s North, Central America and Caribbean Volleyball Confederation (NORCECA) Continental Championships. She was also the 2014-15 Under Armour First Team All-American honoree.

Despite all of her successes in a short amount of time, those close to Mikaela said she is the same person she was from the beginning.

“She’s so humble about every award that she receives and never wants to boast about it. She’s so kind to everyone on the court and off. Very patient, very loving and always wanted to make everyone feel like they’re a very important part of the team,” said Pothitakis.

Volleyball takes up a big portion of Mikaela’s life, but she still finds time to be involved in things like the National Honors Society, Student Council and treasurer of the student body.

Michael Sheerin, principal of Holy Trinity, said Mikaela has no problem balancing her athletics and academics. “She shares her academics and her love for volleyball and balances it much better than what most typical students can. After all that’s what separates those that can become great,” said Sheerin.

This proves true as Mikaela will be graduating with a 4.167 GPA.

Her favorite subject is probability and statistics and she’d like to become a veterinarian after college. Outside of school, Mikaela participates in the local fair 4-H club and Big Brothers Big Sisters of America.

Mikaela is positive she couldn’t have achieved any of these things by herself, but with the help of her community and most definitely her parents Kathleen and Brian Foecke.

Both parents agree they are very proud of their daughter, but don’t try and dwell on Mikaela’s successes. They each still have their own proudest achievements of Mikaela’s many successes.

“Her overall humility and attitude on the court is probably my proudest part of her success,” said Brian. He said the compliments he gets about his daughter, even from parents of the opposing teams, makes him proud as well.

One thing Mikaela will look forward to in the near future is studying and playing for the University of Nebraska this fall.

When asked what advice she would give to those younger than her pursuing the same success, she said, “Never give up and keep fighting…shoot for the moon because you never know where you’re going to land.” 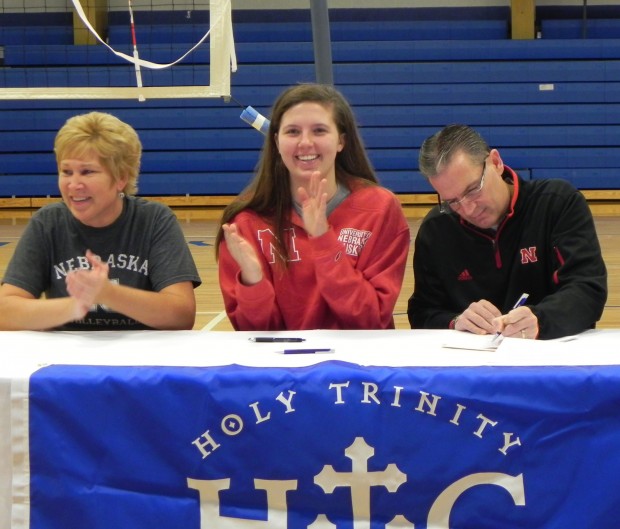 What is your favorite food? Pizza.

What is your favorite movie? The Longest Ride.

What season do you like best? I am more of a summer girl because I love to spend time outside and enjoy the ocean even though I don’t live by one.

What would you like to own that you don’t already have? I would like to have my own island so I could vacation there with my family and friends whenever I wanted.

If you were stranded on an island, what three things would you want? I would take a water bottle full of water, a tent for protection and a volleyball!

@hsillustrated
Previous Eating Fruits and Vegetables for Better Performance
Next Fort Madison, Iowa: Behind the Team All the Way