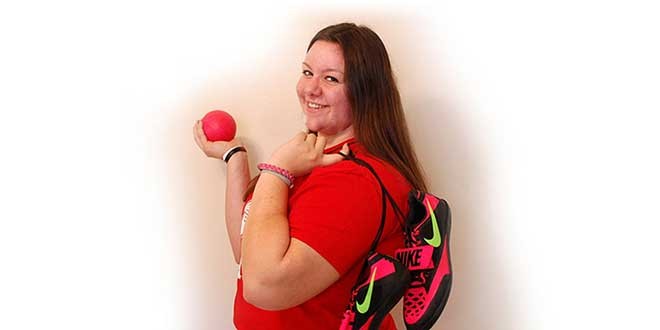 Helping people is a long-term goal for Ocean Township High School (NJ) senior track and field star Michelle Mazza. Her courageous accomplishments in sports and life in the face of difficult medical challenges have focused Mazza on a medical career to help others as she has been helped in her personal struggle.

Her medical challenges surfaced in July of 2013 while on a trip to Niagara Falls with her parents and brother.

Michelle’s mother, Dara, explained the event. “We originally thought Michelle had an upper respiratory infection that was being treated with oral antibiotics. After being on vacation for a few days, the medicine didn’t seem to be working. While at dinner in Massachusetts, she had no appetite and coughed up a large blood clot into her napkin. She did not collapse but was extremely weak. That is when we decided it was time to go to the emergency room to be evaluated.” Michelle’s father, Don, enlisted the help of local paramedics who helped them get to a hospital quickly. By the time the family reached the emergency room, Michelle’s breathing was labored and she began to have chest pain. Michelle’s mom, a licensed practical nurse, was clearly worried. Dara further explained how the situation seemed to deteriorate quickly. “Her diagnosis went from an upper respiratory infection to significant multi-lobe pneumonia. Antibiotics were started immediately and a CAT scan was ordered. After the results of the CAT scan were released, it was decided there was something else going on in her lung. She was then transferred to Children’s Hospital in Boston where the doctors confirmed the tumor and the fact that it tore a hole in her bronchial artery!” The official diagnosis of mediastinal teratoma, although extremely serious, gave Michelle and her family a sense of relief as they knew the condition was treatable, but it would be a long and painful journey.

Mazza and her family chose the Children’s Hospital of Philadelphia for her surgery and long-term medical treatment. Dr. Pete Mattei and his team performed the surgery near her armpit down her left side where there is now a noticeable scar. During her recovery, Mazza was monitored by Dr. Lena Winestone of the for two years. A permanent effect of having her left diaphragm paralyzed is that Mazza is unable to physically hiccup, her mother Dara explained.

As Mazza faced the prospect of a long recovery, her mother noted her determination. “There was no way Michelle was going to fail at a full recovery. She was determined.”

Mazza’s deep interest and involvement in sports was threatened by her medical tribulations.

Mazza’s interest in sports started early and continued right up to the time of her medical emergency. “When I was in first grade I started to play recreational basketball. I took a liking to it and was a decent player throughout the eight years I played. In fourth grade, I played up with the older girls who were in fifth grade and was sometimes on three or four teams at once. I played recreational, travel, school, and AAU basketball, sometimes all at once. In fifth grade, I went to Nationals with my AAU team at Disney’s Wide World of Sports, where I had the time of my life.”

As she entered ninth grade, Mazza’s interest shifted from basketball to track and field. “Freshman year came and I was sick and tired of playing basketball, so I made my decision of not coming back to it. It was an extremely difficult decision to make, but I needed a change for the better, so I took up shot put. I started out not sure if I was going to like it but by winter season of my sophomore year, I loved it. I started to become a student of the throws, and would go home after practice only to watch video and study the form of anyone from Valerie Adams to Ulf Timmerman to David Storl. Sports are what have always been there for me in life and they have shaped who I am today.”

This love and passion for sports was now at risk because of her medical challenges.

@hsillustrated
Previous Colin White: Skating to the Top
Next Paul Thiergartner – Deafness is No Barrier