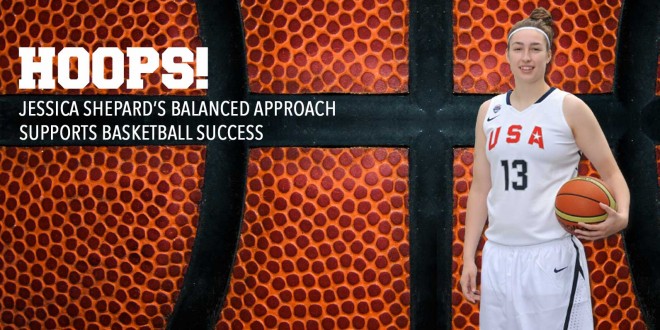 Ranked third in the country by ESPN and first in her position, Jessica was also Gatorade’s 2013-14 and 2012-13 Nebraska Girls Basketball Player of the Year. She played for Southeast High School in Lincoln, Nebraska, and lead them to a state title in her sophomore year. Jessica hopes to lead the Fremont team to a title shot at the state tournament this season.

Jessica’s story of success begins with her family, and the interesting family relationships which have developed over generations and which surround and support her in love of the sport.

Older sister, Taylor, plays on the women’s basketball team at Midland University. Younger sister, Samantha, also aspires to basketball success and will join the Fremont Girl’s Basketball team as a freshman this year when the season begins on November 17th.

Grandfather, Wes Shepard, has imparted his love and knowledge of basketball to his granddaughters. Among Wes Shepard’s basketball highlights are coaching the Chinese National Team in the 1980s and an All-Star Team in Europe, as well as several winning teams in Nebraska.

Jessica explained the influence of her family and coaches. “In my early years my Grandpa would drive fifty miles three times a week to work out with my brother, sisters and me. I’ve learned a lot from the great coaches I’ve had over the years, including my dad and mom, and by watching the game. Growing up, and still today, we play a lot of games in the driveway. My experience this past summer playing for Dickson Jensen of the All Iowa Attack in the Nike EYBL circuit and my Team USA Experience, playing for Coach Dawn Staley, Kim Barnes-Arico and Jeff Walz, have allowed me to continually be challenged playing with and against better players.”