During the early morning hours of Sept. 23, 13-year-old Fiona Goh stepped into the water off of Anacapa Island. Just more than 10 hours and 12.4 miles later, she emerged from the brisk ocean as the youngest swimmer ever to complete a California channel passage. 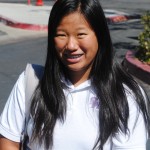 In order to accomplish the feat, Goh, a freshman at Rancho Santa Margarita High School who is still two months shy of her fourteenth birthday, had to overcome more than her age. During the swim, Goh suffered more than one dozen jellyfish stings, dealt with early-morning darkness and battled strong waves and currents.

The next day, however, Goh was back to class at Santa Margarita.

Despite her modesty, Goh is receiving a lot of admiration.

“There are few adults who possess the fortitude to complete such an endeavor and only one 13 year old that I’m aware of,” said Scott Zornig, the president of the Santa Barbara Channel Swim Association.

According to official records, there have only been 350 solo marathon swims in the California Channel Islands since 1927. Stacy Frezonki, who swam from Catalina Island to the mainland in 1971 when she was 14 years old, held the age record before Goh.

For now, Goh is turning her attention to more typical high school activities: She plans to compete on Santa Margarita’s swim and water polo teams.

Emily is the publishing coordinator for High School Illustrated — and she loves receiving new content! She is a recent journalism graduate from the University of Kansas. Her favorite sport to participate in is track and field. Her favorite sport to watch is basketball. Rock chalk, Jayhawk!
Previous The Basics of Warming Up
Next Manning’s Record-Setting Game the Result of Hard Work