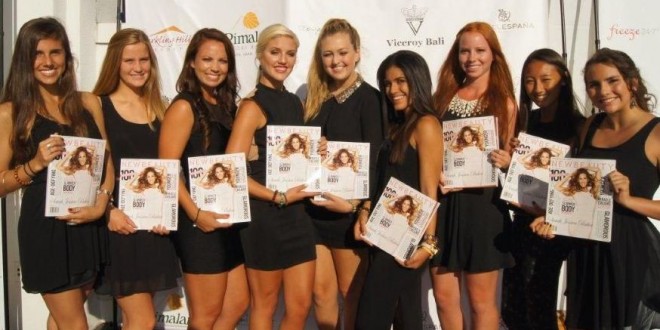 Internships, part-time jobs and behind-the-scene visits to top companies in the Orange County are not reserved for college students. In fact, with the help of Fashionomics LIVE!, high school girls are getting the chance to see what the real world is all about.

Fashionomics LIVE! was started Orange County and is led by college interns. It is currently made up of ladies from Laguna Beach, JSerra, Santa Margarita Catholic, Aliso Niguel and Sage Hill high schools.

It’s All in the Name

This organization is comprised of students ranging from ages 14 to 17 years old, so when Sherri Sheck-Merrill was considering different names, she wanted something that high school students could identify with.

“Careeronomics was a little too sophisticated and very intimidating for a lot,” Sheck-Merrill said. “I just wanted something that opened up the mindset, kind of like a flower blooming.”

Sheck-Merrill settled on “Fashionomics LIVE!” because most girls love fashion, regardless of whether it is something they want to do with their lives or not.

“It’s user friendly for ninth- through twelfth-grade students,” Sheck-Merrill explained. “Fashionomics LIVE! is not about modeling. It’s not about becoming an actress per say. Yes, we do touch upon some of the fashion majors but, it’s not specifically just fashion because we do tap into other career fields as well.”

Sheck-Merrill created the group in 2011 after realizing the void between women’s knowledge of the careers that are available and the majors that are offered at the college level. After speaking with many college students, she found that many didn’t have real-world experience with their major before they were forced to declare on in college.

The problems begin in high school when students must choose their futures based on written descriptions in college catalogues. In order to fix this, Fashionomics LIVE! caters toward the high school students who are interested in creating their own internships rather than waiting for college.

“If I hadn’t done Fashionomics, I would still have all these questions unanswered” said Madi Razzano, a junior from Santa Margarita Catholic High School. “Before I joined, I thought owning a small retail store would be easy, just selling clothes. But, once we went behind the scenes I saw that you have to buy clothes, merchandise and do a lot of other stuff. So, I like that it actually teaches you what to do.”

In terms of normal school activities, Razzano runs track and field, is a part of the Pink Ribbon club and is a member of the Ethiopia Operation. But, she says that Fashionomics LIVE! is unique in that it helps her figure out what she wants to do when high school is over.

“I hope to gain a better overall experience about how fashion can change an outcome,” Razzano said. “If you go to a college interview, your fashion knowledge can help you in that situation.”

As one of the original members, Razzano has seen the organization grow. She particularly enjoys the new friends she has made. With girls from all over South Orange County, there is a lot more diversity than there would be within a specific high school bubble.

Fashion is the hook, but what keeps the girls coming back is the inside look at an industry that is desirable but much harder than many initially think. With all the competition for college internships and jobs for those fresh out of college, this early start gives each high school student a much better chance at getting on the fast track to a career.

As a part of the organization, the group goes on 12 tours a year. During these events, the girls learn how companies work, what employees do and how they could get on track to succeed in a similar environment.

According to Sheck-Merrill, each tour is broken down into three sections: the board room, the actual tour and the project. During the first hour, the girls sit get to know the owner, founder or upper management of a company. In the second hour, the girls see the facility and are able to ask questions about specific departments.

Finally, they are given a challenge by the company. This is intended to spark imagination and to give the students a taste of what it would be like to be in that specific industry.

Sheridan Hauk, a JSerra junior, spoke highly of the adventures she has had as a part of the Fashionomics LIVE! group. Her favorite was a trip to the Emmy Awards’ style lounge where she, as a member of this organization was able to either carry bags to the talent or escort them to the check in desk  a couple of days before the actual show.

“I kind of like that (Fashionomics LIVE!) shows the challenges of each job because it puts it into perspective and shows you what you would really be doing” Hauk said.

In addition to being a part of Fashionomics LIVE!, Sheridan takes numerous AP courses, plays tennis, is a member of the National Charity League and plans on adding more clubs to her resume before she graduates.

Luckily for Hauk, the Fashionomics LIVE! organization is unique in that it does not only focus on one area or limit what members can learn. Instead members are given choices and exposed to numerous categories within the fashion realm, such as retail stores, magazines, designing, merchandising, eco-friendly companies and more. This variety is what sets them apart from every other high school group.

“I’ve always liked fashion and I knew it would help me figure out what kind of major I would want to do because it covers fashion, retail and marketing,” she said. “I am still undecided but this has helped me to see that this isn’t just fun and games. You have to be prepared at least two seasons before in fashion. It’s not as easy as it looks.”

Getting Ahead of the Competition

A common thread among all of the overachieving ladies that are members of this group is that each one is willing to push the envelope and is curious about the world around them.

“When these girls first started, there was a fear, there was an intimidation of ‘How do I get a part time job?’” Sheck-Merrill said.

Through this program and going out the companies that surround them, each girl has learned about fashion, philanthropy, marketing, merchandising and much more. But, the most important thing they have learned is who they are and what possibilities are open to them.

“Believe it or not, going to 12 businesses a year, seeing what the opportunities are, participating in the projects, sitting down with founders of Billabong, sitting down with the couture designer of the year for the bridal industry, being chosen as the first internship program for the Emmy Awards based outside of Los Angeles, their confidence has blossomed,” Sheck-Merrill said.

In a time owned by reality television and unrealistic role models, these women are looking inward to find a new thing to work towards: a successful career. Fashionomics LIVE! prides itself on strong women who are making a mark for themselves. The creator of the group is proud of her women for having both beauty and brains.

“There is something refreshing about that and it is hip, cool and trendy to be beautiful from the inside out and to be proud of it. That’s the new generation — generation I,” Sheck-Merrill said.

These young ladies have already done so much at such a young age and their continued focus on creating unique internships and exploring different career options makes them a force to be reckoned with.

Johnni is a graduate of the University of Southern California. She grew up in Orange County and has a passion for sports.
Previous Santa Margarita Model United Nations Members Take England
Next Newport Harbor Water Polo Cinches Undefeated League Season