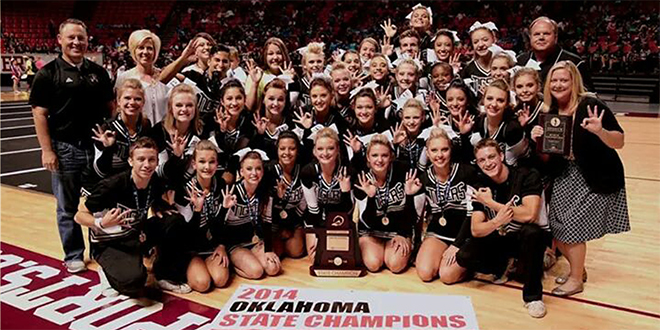 Dazzle, Strength, Skill and Fun: Broken Arrow Cheerleading Squad Has It All

The new era of cheerleading has all heads turned in its direction, waiting to see what’s next. Feats of strength and coordination dazzle the eye in performances of spirit and positive energy. The sheer difficulty of the routines seen at national cheerleading competitions seem to dispel any prejudices against the sport; old ideas of pom poms waving are left in the dust. So let’s put the stereotypes away, and see what this sport is all about.

Last year, at the high school competition put on by the National Cheerleaders Association, the Broken Arrow varsity cheer team took home the National Champion title in the Large Coed Advanced Division. Competitions are a whirlwind of uniforms and stunts, but Justin Messner, a senior and co-captain of the varsity Broken Arrow team, says trust can help guide a team through the confusion. “When you’re on the mat you have to be able to trust the people you’re with. It’s not about any one person out there, it’s about all of us as a team.”

And trust might relieve some of the extreme pressure put on a team to perform perfectly, come competition time. In most competitions, each team is only allowed
a single performance. Amy Howe, head coach for the Broken Arrow varsity team,
says “They work for months for two minutes and thirty seconds, and it defines their entire season. There are no do-overs. You have one chance, and there’s a lot of emotion that goes into that.” This intensity of extreme stunts and high pressure adds to the newfound recognition cheerleading is getting worldwide. Messner adds,
“In most sports you get more than one try, like in football you’ve got a lot of games
to prove yourself. But in cheer, you’ve got one time to show everything you have.
If you mess up, that’s it. There’s no going back.”