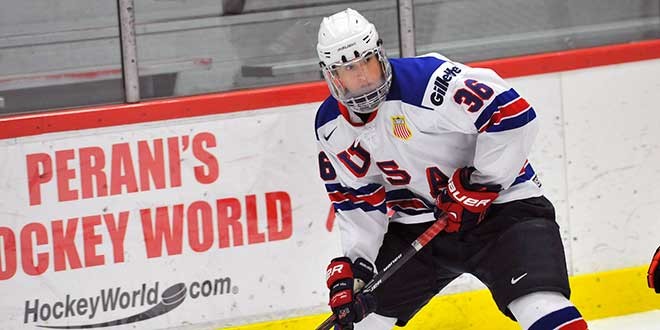 Colin White: Skating to the Top

A rigorous road for Colin White, on his way to play professional hockey.

ANN ARBOR, Michigan__ Even before he was old enough to understand the depths and dedication his dream would require, Colin White dreamed of playing hockey. He dreamed of Boston College hockey, of playing for a team he idolized, and being one of the few who made it.

As a six-year-old, Colin White stood in the ice rink at BC, waiting, just so he could high-five all the players. He told everyone that when he grew up, he was going to play BC hockey.

Clearly, his talent is as immeasurable as his passion.

But the path wasn’t as simple as dreaming to play, waiting eighteen years, then walking onto the ice. The level of commitment Colin dedicated to the game of hockey, at such a young age, could leave your eyes wide in astonishment.

Today, Colin plays for the U.S. National Under-18 Team. The rigorous program grooms the best of the best for a future career in playing hockey. Even with the superior talent lining the roster for the U-18 National Team, Colin still stands out.

“All the kids that come here are skilled. They can all skate, they can all shoot, they all have the talent and the ability that most people that play this game never have,” says Assistant Coach of the U-18 U.S. National Team, Nick Fohr. “It’s when you can add in the compete factor that Colin has, and how hard he works, it’s if you have those components with that skill, you are hard to stop.”

And although humble, Colin recognizes the strength of his quick game.

“I’ve got some speed to my game and I try to play up-tempo,” said White, describing himself as a player. “I do a lot of the little things.”

And the little things pay off. Colin is one of four USHL (United States Hockey League) players to receive an “A” rating from the scouts.

Fohr sees that talent and an impeccable work ethic that drives Colin’s game.

“He’s got a motor that just doesn’t stop,” says Fohr. “Sometimes guys think that they may have him beat, or his opponents may think ‘okay we’re by him, we got this,’ and then he’ll turn around and catch them and steal the puck. He’s very competitive and he competes so hard, and those are major major attributes.”

“It was great to hear, but I try not to focus on it too much,” said Colin. “I don’t want to get caught up in that stuff, you know? Hopefully, I can just keep it up.”

Growing up in Hanover, Massachusetts, a suburb outside of Boston, Christine White, Colin’s mother, noted that catching the hockey fever was unavoidable. White wasn’t even five-years-old before the first time he was on skates.

“He wanted to basically be able to play with all the kids in the neighborhood, because that’s what they would all do in the winter…everybody had the backyard rinks,” said Christine. She added, laughing, “He wasn’t going to have any friends if he didn’t learn to skate.”

And it didn’t take him long to learn — and learn well. He was playing in the Metro League by age six and fell in love with the game.

He honed his skills while playing on the youth teams that helped mold him into the player he is today, most notably being the South Shore Kings, under the coaching of Neil Shea.

From such a young age, the game has shaped Colin’s character in the most positive ways. Not only does the game teach discipline and a strong work ethic, but it builds a well-rounded, mature young person.

By the seventh grade, Colin made the decision to attend Noble and Greenough School, a prep school in Dedham, Massachusetts. In addition to the schools esteemed academic accreditation, the renowned hockey program at Nobles truly set him on the path to a bright future with the game.

After three seasons playing for Nobles, White was approached by the National Development Program and was offered the opportunity to play for the U-17 U.S. National Team.

Joining the National Team is a demanding commitment. Colin, amongst 21 others dedicated to hockey, moved across the country to Ann Arbor, Michigan and signed their life away to the game and to the development program.

“The commitment we put these kids through here is off the charts,” says Coach Fohr. “I can’t believe we actually do what we do, and the kids actually thrive through it, which is crazy.”

@hsillustrated
Previous DIG IT! Kathryn Plummer — Confident, Competitive and a Flair for Fun
Next Michelle Mazza: When You Throw, Throw Hard