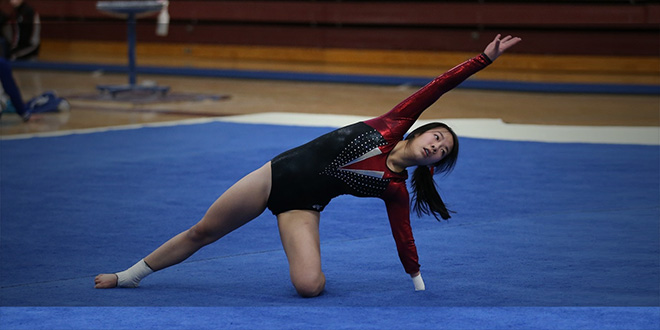 ‘Tis in ourselves that we are thus or thus. Our bodies are our gardens to which our wills are gardeners. – William Shakespeare, Othello

We generally think of gymnastics as a sport in which the athlete’s body is their primary instrument. Each time Amelia “Millie” Andrilenas, a junior at Juniata High School in Washington, takes to the gymnastic floor she demonstrates that success in the sport comes from the fusion of her soul and her body to display the beauty of the physical form in motion. Amelia consistently receives top scores for her team despite a congenitally malformed left hand that has not developed past the elbow.

To call Andrilenas’ record impressive is an understatement: she won a statewide competition before the age of thirteen, was an individual qualifier for last year’s 3A/2A state meet in both floor and vault events, and placed first, second, and fourth all-around in meets during the 2013-14 season. While it’s only her second year with the team, Millie is making waves in the gymnastics world. “I moved here sophomore year, and we didn’t have a team before that.” But the program has definitely grown. Starting out with ten girls, the team finished this season with twenty-six.

Millie’s consistent ability to return to the sport testifies to her determination and raw talent. She was introduced to gymnastics through a friend in the first grade. “I remember her telling me I’d really like it and I did. Although I dropped it for a year in second grade, I picked it back up the year after.” Millie left gymnastics for the second time, spending close to two and a half years in Ethiopia with her parents on Christian missionary work.

“Obviously, gymnastics wasn’t something Millie could continue to pursue in Ethiopia,” said her father, Jim Andrilenas. “However, I remember when we were getting ready to depart for the United States; we took the opportunity to explore the country a bit further than we had previously. We encountered a few women with only one arm, who were living their lives normally. While it’s never been an issue for Millie – and we were always fortunate for that – she realized she would need to strengthen her limbs in order to jump back into the sport.”

To read the rest of this article for free, check out the latest issue of High School Illustrated – USA National Edition for iPad and iPhone, completely free on the App Store.