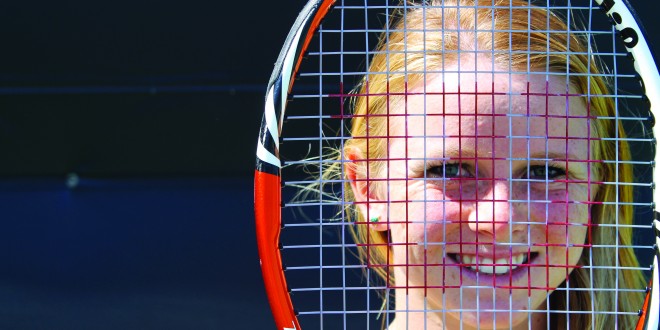 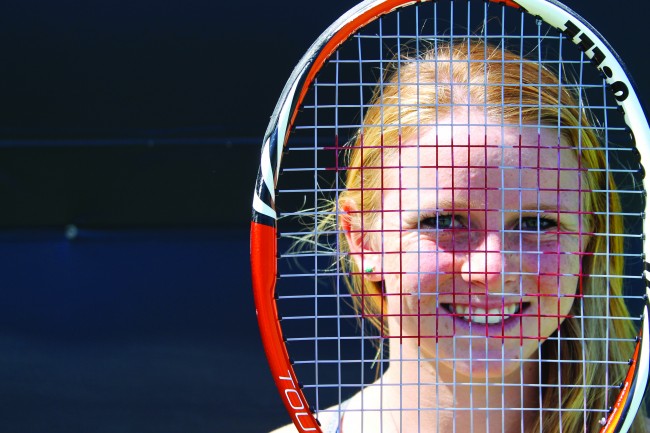 HOW LONG HAVE YOU BEEN PLAYING TENNIS? HOW DID YOU GET STARTED?

I started playing tennis when I was six years old. My parents coached me until I was 10 which was when I started working with the USTA’s player development program in Carson, California. I continued training with the USTA in Carson for the last seven years until this past January. I now train at the Woodbridge Tennis Center in Irvine where I train with some of the top players from other schools which makes practice an interesting experience.

HOW WOULD YOU DESCRIBE YOUR TENNIS GAME?

I am right-handed with a two-handed backhand, and a regular forehand. I feel like my game is kind of a hybrid between aggression and defense. I like to be aggressive and I like to volley, so I really like playing doubles. I do prefer being aggressive and staying up on the baseline, but I feel like I can defend pretty well if I have to.

WHAT AREA OF YOUR GAME NEEDS THE MOST
IMPROVEMENT FOR THIS SEASON?

I am still working on my serve. It has come a good way from where it was. It was never really my strength, but I am definitely working at steadily improving it. It’s no secret that I’m not the tallest person, so it’s not a huge shocker that it’s not one of the things that comes the most natural. I think everyone has at least one aspect of their game that they have to work just a little bit harder to master, whether it is speed, reaction or even mentally keeping focus. It’s all a part of the game.

I do a program called “Fresh Start” so two of my classes are independent study. The program makes my schedule pretty flexible allowing me to fit tennis into a lot of my day.

HOW DOES AN INDIVIDUAL SPORT TRANSLATE
INTO A TEAM SPORT?

High school tennis provides a good balance between the individual aspect of the sport and holding up your part for your team, but it’s great because you still have the team’s support in your match. I play singles for our team and that is kind of our strong suit giving the team confidence in earning key points in each match. This helps take pressure off of the doubles because they know singles will get us that much closer to a win.

WHAT ADVICE CAN YOU GIVE TO INCOMING ATHLETES?

I think prioritizing is extremely important. Also, having set up what you want to accomplish in a certain amount of time and not going about it in an unorganized way. For me, I don’t go to school all day every day, but when I am on the court I have specific things I’m doing and once I accomplish what I’m working on at a certain time I’m not going to be spending excess time where I don’t need to be.  Make sure you are being productive because it is easy to get side tracked with everything you have going on and after that, of course have fun.

WHAT IS IT LIKE FOR AN ATHLETE IN ANY SPORT TO FEEL BURNED OUT? HAS THIS FEELING CHANGED YOU FOR THE BETTER?

I feel like everyone goes through a burn out to some extreme. Whether they have had a bad tournament or you haven’t been playing well for a month or two, everybody goes through it in a way. I was kind of feeling that way before summer started. My days were feeling very long and monotonous, but then I did super well this summer. So in a way, those can be the best times because if you can get through that then usually there is going to be something great around the corner. It is just difficult because you don’t know how long it is going to last.

HAVE YOU SUFFERED ANY INJURIES? HOW HAS IT
AFFECTED YOUR GAME OR YOUR ABILITY TO IMPROVE?

I had one bad lingering injury for about eight months. It was difficult because it was a high hamstring tear, a difficult spot to treat where your leg connects to your torso. It was easily irritated, so it was difficult going through that. At the time, my trainer in Carson really helped me a lot with it and we eventually figured out how to heal it and prevent it from happening again.

IF YOU COULD THANK OR ACKNOWLEDGE
SOMEONE REGARDING YOUR TENNIS
CAREER, WHO WOULD IT BE?

My mom has always been super supportive. Though it is kind of hard because she knows what she is talking about, but I don’t always want to admit that. She has always been there and put up with my shenanigans and she has been the one who has dealt the most with my ups and downs.

WHAT IS YOUR FAVORITE HIGH SCHOOL
SPORT MEMORY?

Aside from the obvious — winning a CIF Championship — looking back on my high school tennis career so far I think I’ve more enjoyed all the work the team has put in beforehand. Like those days when not everyone is at their best, we have had a long week and are feeling tired. I really have had fun on our team trips to different tournaments and schools that are out of the area. The whole season is full of so many more memories that build up to the success of winning CIF. This year before season began we took a team trip up to Kern County where we did white water rafting and camping. We had a few new girls on the team this year and it was a good chance for everyone to get to know each other and to get the team revved up for the start of a new season. Especially for the new girls the team gives them a place to belong so entering high school is not so terrifying.

WHAT SPORT WOULD YOU PLAY IF YOU DIDN’T
PLAY TENNIS?

If I didn’t play tennis I think I would either play soccer or I’d want to surf. Soccer was really the only other sport I played when I was younger so I don’t really know anything else besides those two (tennis and soccer). Since I live so close to the beach I think surfing would be a lot of fun as well.  I’ve never actually attempted it, but it looks to be so much fun and it could be something that you can do on your own, or something to do with friends.

WHAT’S IN YOUR FUTURE AS A TENNIS PLAYER?

I don’t think right now it would be the wisest decision to just skip college. My goal is to go to college and then try and play pro tennis. I mean if I can, why not get my schooling paid for?  A $65,000 education is kind of hard to pass up. I figure I can always leave early, depending on how I do, or just turn pro after college. Plus, looking at the pro tour right now, the players who are doing well are not the 18 or 19 year olds. The ones that are winning slams are in their mid-twenties. I should be 22 years old when I finish college and I’ll see where my game is when that time comes.

CAN YOU TELL ME ABOUT YOUR RECRUITING PROCESS?

I have taken a few recruiting trips recently and am still in the process of figuring where I am going to best fit.  I’m talking to the Stanford coaches at the moment, and am going on a visit to Duke at the end of November.  My sister goes to ASU and plays for their tennis team so it has given me a chance to see their program throughout the year as well as get to know the coaches. The three main schools I am looking at right now Duke, Stanford and ASU.

LOOKING BACK, ARE THERE ANY MEANINGFUL MOMENTS ON THE COURT THAT STAND OUT TO YOU?

Last year, on the day of CIF Finals, our whole team, 23 and all, made the trip up to The Claremont Tennis Club for the finals to be played against University HS. The two previous years we lost in the finals to Campbell Hall. I remembered the previous year, how terrible I felt after losing. The team was counting on me to win all three of my matches and I had lost two of them. It was probably one of the worst feelings I have experienced.

This past year, despite Joanna not being on the team anymore, I wasn’t going to let it happen again.  Joanna drove up with my parents and came to support the team all the same. On that day last year, you could tell that we weren’t going to be stopped.  We had endured so much as a team over the past two and a half years, it was our time. There was a calm but intense focus in the air. We all were making each other smile as usual and we knew that we were going to take care of business.

Every single one of the girls stepped up that day. It was in no way won by a single person.  Our doubles line up rose to the challenge and a huge amount of credit has to be given to them. Most people going into the finals would have said that Dana singles was our strong suit and that’s where we won a lot of matches. But that day our doubles players were the ones who held their own.  We lost two of the total nine singles matches that day, which in the past two years cost us the match. But this year our doubles really stepped up to the plate and held their own.

To be honest I was more ecstatic that we won it as a TEAM. It wouldn’t have been possible without all of them there, and I don’t think it would have been as sweet either if we didn’t face some adversity either.  With my sister there cheering us on, we won the match and the championship. In classic Dana Hills style we rushed the court after the last match finished, with our Captain, Jacqueline, screaming at the top of her lungs, “Hey, Dana! How do you feel?!?!?” and with the cry heard probably around all of Claremont we replied, as we always do, “We Feel good! Oh, we feel so good!!!!”

Previous Preparing For Campus Visits
Next Dreaming of an NCAA Scholarship? How OC Students Get it Done