The 2013 All Nebraska Volleyball Team has been announced. Here is the First Team lineup:

Sydney O’Shaughnessy (Omaha Marian) – O’Shaughnessy dished out 1,164 assists and had 134 kills
Marysa Wilkinson (Lincoln Southwest) – The 6-foot Creighton recruit had 504 kills and led the Silver Hawks back to the state tourney for 10th time
Olivia Boender (Waverly) – the 6-foot-2 Nebraska recruit had 497 kills
Alexis Anderson (Millard West) – A 5-11 middle blocker, the senior led the Wildcats with 316 kills
Morgan Nikkila (Hastings SC) – The 5-10 senior was a driving force for the Hawkettes finishing with 459 kills and more than 350 digs.
Sydney Townsend (Lincoln Pius X) — at 5-8, Townsend had 229 kills this season and 526 digs
Morgan Stute (Kearney Catholic) – the 5-6 libero had 423 digs and had 116 kills, 56 aces and 55 assists. 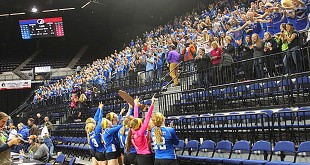 Fort Madison, Iowa: Behind the Team All the Way

By Elizabeth Gullett Mikaela Foecke is an incredibly powerful volleyball player, whose humble and down …